Traditionally, halo radii have been defined based on the spherical overdensity criterion where the halo radius encloses some overdensity with respect to the critical or mean density of the universe, leading to definitions such as R200c, R200m, and Rvir. There are, however, a number of issues with these definitions: the halo mass and radius undergo pseudo-evolution, a significant number of satellites orbit outside the virial radius (e.g., Wetzel et al. 2014), and infalling subhalos begin to get stripped far outside Rvir (Behroozi et al. 2014). 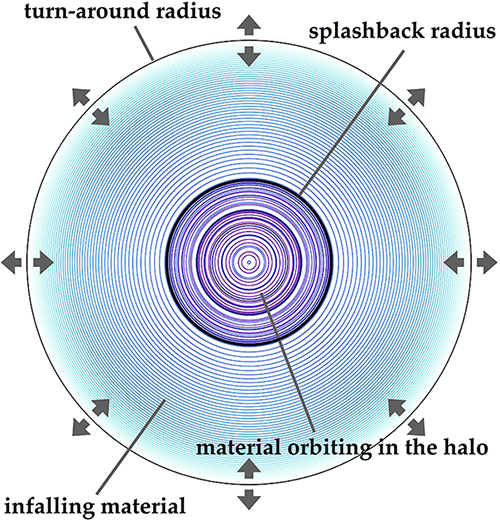 To remedy these issues, we have proposed the splashback radius (Rsp) as a physically motivated definition of the halo boundary. Rsp is the radius where particles reach the apocenter of their first orbit. The theoretical motivation for this definition is provided by the self-similar spherical infall model (Fillmore & Goldreich 1984, Bertschinger 1985, Adhikari et al. 2014): in spherical symmetry, this radius cleanly separates infalling material from matter orbiting in the halo, and by definition includes the orbits of all satellites in the halo (see figure).

In perfect spherical symmetry, the splashback radius would be marked by a caustic, an infinitely sharp drop in density. This feature is smoothed out in realistic halos but we detected it in stacked density profiles in simulations. While conventional definitions depend only on the static density profile, the location of Rsp depends on the mass accretion rate because a rapidly growing potential well reduces the apocenters of particles’ orbits. Overall, Rsp is significantly larger than spherical overdensity radii, roughly between about 1 and 2.5 Rvir. This is illustrated in the figure below: the left panel shows a slowly accreting halo where Rsp is significantly larger than R200m, the right panel shows a quickly accreting halo where Rsp is slightly smaller than R200m.

While the location of the density caustic is obvious in the above examples, identifying it in individual halos is non-trivial due to non-sphericity, sub-structure, and the complex nature of orbits in LCDM halos. We have presented two algorithms for measuring Rsp. The first, SHELLFISH, finds sharp drops in the 3D density field around halos and fits their locations with non-spherical shells (Mansfield et al. 2017). The second, SPARTA, analyzes the orbits of individual particles and assigns the halo a splashback radius based on the distribution of the orbit apocenters (Diemer 2017). The figure below shows the classical virial radii (orange) of halos with at least 1000 particles in a simulation, the white circles show the splashback radii identified by SPARTA. Based on this data, we have presented calibrations of Rsp as a function of halo mass, accretion rate, redshift, and cosmology (Diemer et al. 2017; code to compute the predicted splashback radii and masses is included in Colossus).

Observationally, the splashback radius has been detected in the density profiles of satellite galaxies around stacked clusters as well as in weak lensing (More et al. 2016, Baxter et al. 2016, Chang et al. 2017). However, these observations likely suffer from systematic errors related to optical cluster identification (Zu et al. 2017, Busch & White 2017). I am actively working on a number of splashback-related projects:

The splashback catalogs and merger trees will be made publicly available on this website as soon as possible.