Current hydrodynamical cosmological simulations such as Illustris TNG cannot explicitly follow the radiative transfer and complex chemical reaction network necessary to self-consistently compute the abundance of different species of hydrogen such as atomic (HI) and molecular (H2) gas. Those abundances, however, are key when comparing to observations which typically constrain either HI or H2 rather than the total gas content of galaxies.

Thus, the abundances are typically computed via post-processing (e.g., Lagos et al. 2015). The predictions can be based on observed correlations (e.g., Leroy et al. 2008), detailed simulations including a full reaction network (e.g., Gnedin & Kravtsov 2011), or analytical models of individual gas clouds (e.g., Krumholz 2013, Sternberg et al. 2014). However, the molecular fraction predicted by these methods and models has tended to disagree, both within analyses in the literature and between different papers.

To remedy this situation, we have systematically compared and evaluated different post-processing models and improved on the status quo in three major ways. First, we showed that the models agree reasonably well on average when their predictions are computed in a consistent way, but that their results exhibit large scatter for individual galaxies. Second, we improved the treatment of the UV field by adding a (still extremely crude) optically thin propagation from star-forming regions. Third, we introduced modeling in projection (i.e., in 2D) as an alternative to the commonly used cell-by-cell (3D) modeling. The latter method gives more physical results for certain models. All our data are publicly available as part of the IllustrisTNG data release (see the data section).

Our methodology is illustrated by the Milky Way-like disk galaxy from Illustris TNG100 shown below. The first row shows the stellar density, gas density, temperature, star formation rate, UV field (including optically thin propagation), and the neutral hydrogen fraction. The second row shows the results of applying the HI-to-H2 models on a cell-by-cell basis: the first panel shows the pressure (used instead of mid-plane pressure),the other five panels the five HI-to-H2 models. The third row shows the same but based on projected modeling. Notably, the first model (which is based on a correlation with the observed mid-plane pressure) gives unphysical results when cell-by-cell modeling is used. 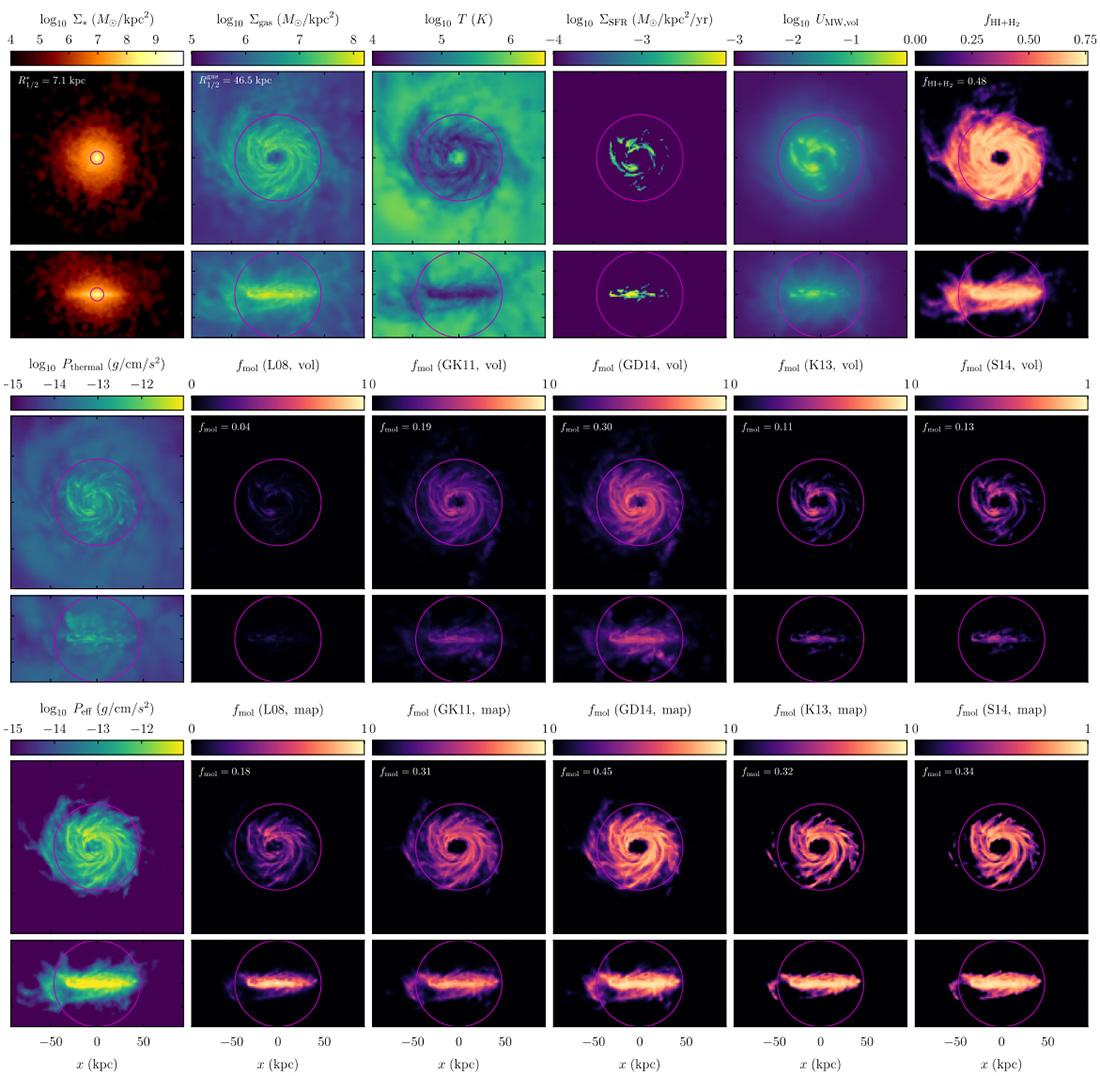 Even ignoring the first cell-by-cell model, the models predict somewhat different molecular fractions for this galaxy. This turns out to be typical, meaning that we can make average predictions but should be careful to rely on the results for individual galaxies. We also caution that other systematic uncertainties remain, for example in the modeling of the UV field.

In a follow-up paper (see below), we compare the HI and H2 content of galaxies in the Illustris TNG100 and TNG300 simulations to observations, mostly at low redshift. In particular, we consider the overall abundance of HI and H2, their mass functions, gas fractions as a function of stellar mass, the correlation between H2 and star formation rate, the spatial distribution of gas, and the correlation between gas content and morphology. In most of these metrics, the simulations match observations reasonably well, particularly in the gas fractions, the HI mass-size relation, and the correlation between H2 mass and star formation rate.

However, we also find a number of tensions with varying degrees of significance, including an overestimate of the total neutral gas abundance at z = 0 by about a factor of two and a possible excess of satellites with no or very little neutral gas. These conclusions are robust to the modeling of the HI/H2 transition. We also compare to the original Illustris-1 simulation, and find that it matches the data much less well than TNG (see the data page for public data and additional figures).